First Long Race When The Dogs Reacted To My Energy 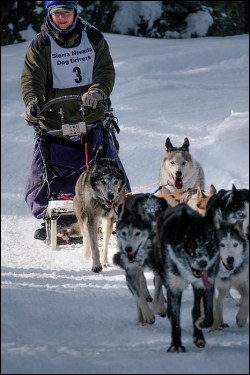 First Long Race When The Dogs Reacted To My Energy

How often does something occur in your life for which you have no explanation, no reference, and which leaves you puzzled as to what is actually going on? Yet we don’t have to be puzzled, there is always an explanation, it sometimes needs a little internal delving to uncover it.

You may have noticed I enjoy dog-sledding, it has been a passion of mine to enter the Iditarod Sled Dog Race in Alaska since 1987 when I first learned about it. Almost 20 years later begin training for that dream in earnest.

During my second year of training everything was in place – I had the dogs, arranged working my job part-time in the winters to enable me to train, a sponsor – and I was about to enter my first big race of 135 miles at Mount Shasta. Two days before this race we learned that my husband was diagnosed with Stage 4 throat cancer and given a 10% chance he would live the next nine weeks. As it was going to be three weeks before treatment started we decided to go ahead with the race, telling no-one, just going ahead with our plans and focusing on this one positive thing.

My race began well, through an accidental spill – my friend’s sled tipped over – I was able to catch up with her and we ran the last few miles together to the checkpoint. I felt exhilarated and happy to be doing something I loved in the company of a friend.

At the checkpoint, where we were supposed to rest ourselves and our dogs for four hours, was where the troubles began. My dogs would simply not settle and sleep. It took four hours for them to rest at which time my friend needed to leave to continue her race. I remained and the dogs finally slept.

Our return journey of the remaining 50 miles began well, the first 25 miles went as planned. However, it was then the leader dogs began acting up, stopping to sniff and to pee instead of continuing to run. I ended up stopping the team and swapping out the leaders before continuing the race. Yet the new leaders did the same, and the stopping and swapping continued for five plus more long and frustrating miles.

By 2pm I was still a ways from the finish line. All the other competitors had got there around 8am and my husband caught up with me to pass on the message that I had to finish by 3pm or be disqualified. I made the decision to scratch the race and continued on to at least be able to say I did finish. It was heartening to see fellow competitors and others cheering me on as I eventually crossed the line.

Despite being dirty and tired, I’d been up for around 40 hours at this point, I attended the banquet and was given a standing ovation plus a brand new made-up-just-for-me award for Most Perseverance. Everyone recognized and applauded the fact that I had kept going despite the difficulties, and kept going without laying blame.

It was around 9 months later, after I had told this story many times, that the truth of my difficulties on that day made itself known.

We all have an energy aura which surrounds us and precedes us, dogs, especially working dogs, are more primitive than humans and therefore more sensitive to this energy we project. I realized that my dog team we reacting to my energy, that as we approached the finish line I was subconsciously aware that I was about to confront the fear that my husband might actually die soon. We all, the dogs and myself, kept moving forward, yet there was that energy that held us back from the reality I would have to face as I approached the end of the race.

I realized we can be so intuitive with energy and yet ignore what it is telling us, bury the effect it is having on us, find it so hard to recognize in our self. It could be that we are not ready to face it, we often attribute the symptoms to something else, but those symptoms appear because of what is going on internally and on occasion we need help to uncover the truth. My dogs were not misbehaving they were reacting to my energy, I help others find where their energy is affecting their world, uncover the truth and give you ease in your life.